Insta Hungry
In a course focused on the evolution of communication and technology, I undertook a semester long project analyzing social media and society .  I investigated how food-focused social media communities have grown out of an age-old communication tradition of food consumption serving as a gateway to socialization.  The dining table has become a digital space.  My findings can be found on my website and on social media.

*All instahungry312 photos taken by Meag Kehoe.
Magazine Layout
I was able to gain experience in digital design while taking a graduate course, Visual Communication.  The projects required use of Adobe Illustrator and the lectures focused on all that goes into creating an impactful design (fonts, weights, colors etc). One particular project challenged students to develop a fictional magazine and design its cover and inside spread.  I created a women's fashion magazine targeted to a more high-end, slightly edgy consumer. 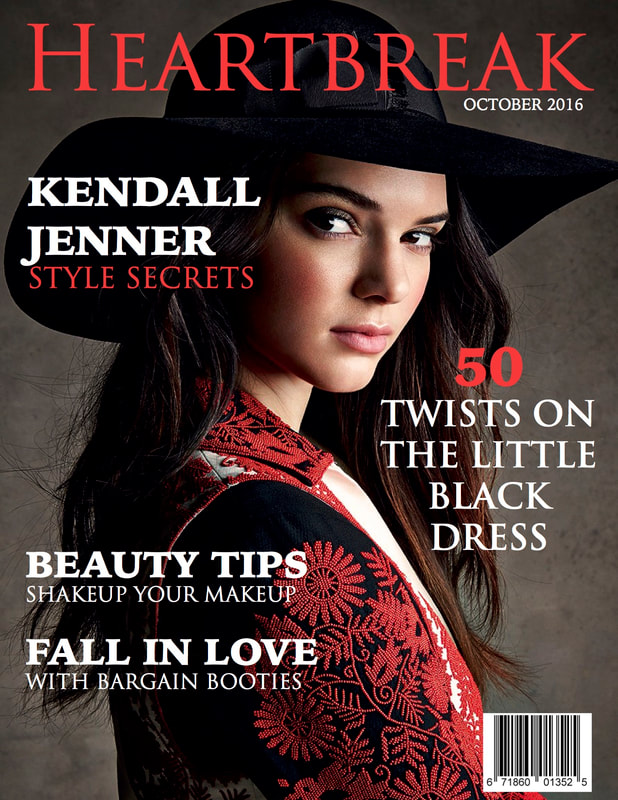 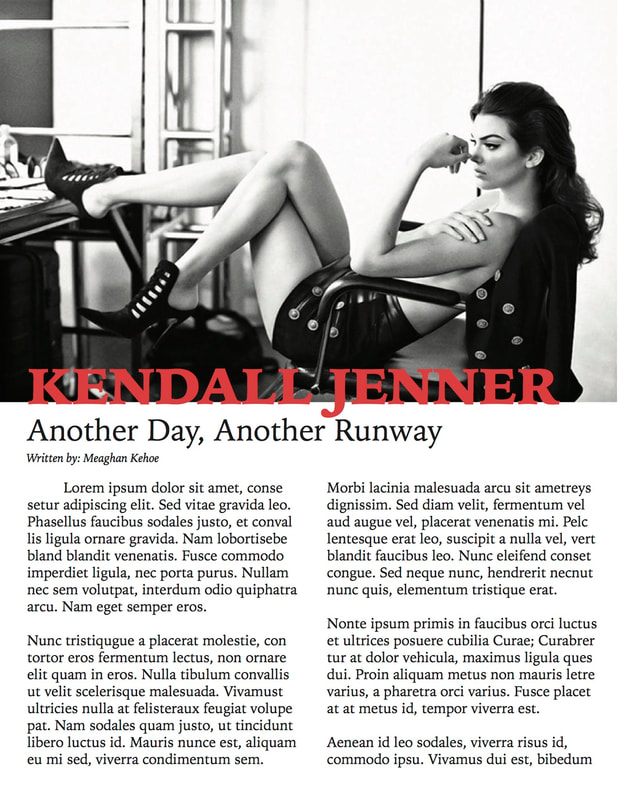 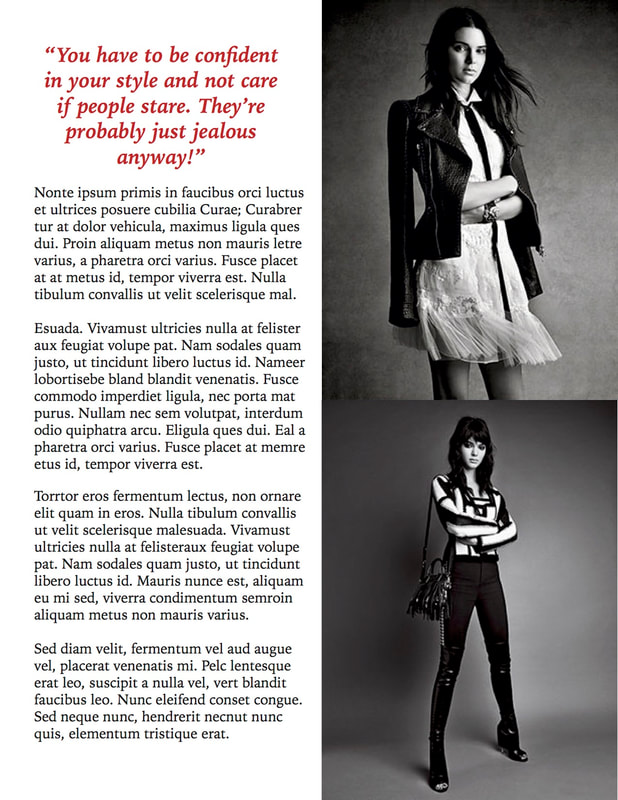 Client Memo
A PR course I took, focused on the brand and business impact of digital media. The professor posed a client dilemma to students and we were tasked to research and advise the company on what action to take.  In the fictional scenario, Forever 21's CEO came across data demonstrating Facebook's dominance of reach and time spent among millennials (their core market).  Forever 21 wanted to know if it should pull back funding from other social channels in favor of putting more into Facebook.  I came to the conclusion that no, funding should not be pulled from Instagram, Snapchat, and other channels. Writing a client memo increased my persuasive communication and research skills.

The chart, which you provided in your memo does indeed show that 18-34 year olds are present and spending more time on Facebook than other social media channels such as, Instagram and Snapchat.  I do not however, think that these statistics warrant pulling back from other social media channels in-favor of Facebook.  Instagram and Snapchat are much newer platforms than Facebook and I think that their continued growth will be very beneficial to a company such as Forever 21 whose core consumer is 13-24 year olds.

According to eMarketer, over 60% of Snapchat users were between the ages of 13 and 24 in September of 2015.  90% of Instagram users are under 35 years old. The most common age demo for Facebook users is 25-34 at 29.7% (eMarketer). The average age of Facebook’s active user is steadily creeping upwards and out of Forever 21’s target demographic.  By 2018 more than half of Facebook users will be 35 or older (eMarketer).  Within the U.S., teen/millennial Facebook use is declining.  Those in the demographic are more likely to look at other platforms beyond Facebook (eMarketer).  The teen/millennial social media momentum is geared towards platforms such as Instagram and Snapchat.

A trend that all social media channels are focusing on is the use of video.  From May 2015 to May 2016 SnapChat’s daily video views have grown over 400% from 2 billion to 10 billion (Bloomberg).  The Financial Times have also noted that Snapchat’s video views have been tripling every six months.  Snapchat is expanding their advertising options for brands due to their tremendous ad viewership growth.  The increasing video view count growing at Snapchat is not something to shift away from. Facebook’s daily video views are slightly lesser coming in at 8 million.  Also, Snapchat users click to play videos unlike on Facebook where they play automatically. The click- action illustrates a higher level of engagement with video content on Snapchat.

bareMinerals launched its Blemish Remedy acne product on Snapchat with a campaign called, “Zit Happens”.  1.9 million Snapchatters watched the makeup tutorial and 30% swiped up to learn more about the product.  After the social media campaign, the search traffic for the Blemish Remedy product on the bareMinerals website doubled.  This campaign targeted a young, female demographic similar to Forever 21.  They were able to engage their core audience by playing on two important trends: video and expiring content.

The Facebook market is large but it is becoming harder to stand out there.  According to Kissmetrics, Facebook post-counts run as high as 1 billion a day.  Social media users are drawn to expiring content because it adds an element of urgency and excitement. Facebook LIVE, Snapchat, and Instagram stories are all favorable platforms for brands to create on-trend expiring content.   Shifting money towards any particular platform would isolate your audience and forfeit opportunities for growth.

Currently, Forever 21 has over 13 million page follows on Facebook and over 12million followers on Instagram.  The photo content on Facebook is averaging around 35 likes per post whereas Instagram is generating 100k likes per post.  Again, though your chart showed 18-34 year olds are spending time on Facebook it appears that their level of engagement is higher on other platforms like Instagram and Snapchat.  Kylie Cosmetics was the number one related search query connected to Forever 21 within the last 12 months (Google Trends).  Kylie Jenner has over 84 million Instagram followers and is frequently garnering media attention for her posts there and on Snapchat.  The related search shows where Forever 21’s core consumers are also spending their time and giving their attention.  Kylie Jenner herself is in the Forever 21 core demographic and has had great financial success with her cosmetic and clothing lines. Her social media presence is heavily aimed at Instagram and so Forever 21 should not pull back on this channel.

In an interview, Forever 21 global social media manager, Mario Moreno stated, “Millennials are looking for brands that provide them with content for their social needs, and to recognize their content and appreciate it through social currency: likes, comments, retweets, and reposts.”  More and more consumers are looking to see the products on real customers.  Social media allows for all users to be content creators and by sharing your consumers content it will start a loyalty loop of purchase.  If they bought an outfit from Forever 21 and post a photo of them in it to their Instagram account, Forever 21 reposts it, the Instagram users will feel rewarded and continue the exchange of product purchasing for social media currency.  53% of users follow their favorite brands on Instagram and engagement with brands is 10 times higher on Instagram than on Facebook (Social Pilot).

Overall, though 18-34 year olds are using Facebook it is time to be patient with the growth occurring on other social channels like Instagram and Snapchat.  The average age of Facebook’s active users is increasing and their platform is lacking in consumer engagement.  I recommend saying ‘no’ to shifting more focus and funding to Forever 21’s Facebook channel and would rather see greater marketing initiatives happening on Forever 21's Instagram and Snapchat channels.